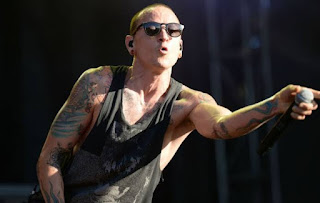 He was born in Phoenix, Arizona, United States, March 20, 1976, is the vocalist of the band Linkin Park.  Previously, Chester joined the band "Gray Daze".  Chester had a side project called "Snow White Tan" which Chester later referred to as "Dead By Sunrise".  From childhood Chester was interested in music, and his inspirations were Depeche Mode and Stone Temple Pilots.

His parents divorced in the late 1980s, when Chester was a child.  Finally, Chester tried to get up using cocaine.  Chester finally managed to overcome his sonic addiction.  He worked at the Burger King restaurant before starting a career as a professional musician.
At first, the Xero band had difficulty finding a new vocalist after the previous vocalist, Mark Wakefield, left the band and became the manager of Taproot.  They heard about Chester, who was from Arizona, United States.  Xero immediately sent a blank cassette and asked Chester to record his voice on the tape.  Chester immediately recorded it and sent it back to Xero.  The band was impressed and recruited Chester into the band.  After this, Chester changed the band name Xero to Hybrid Theory.

In 2004 - 2005, several members of Linkin Park had side projects.  Chester didn't miss it.  He then formed a band called "Snow White Tan".  However, Chester himself changed his name to "Dead By Sunrise".  and he's really COOL at his appearance every Dead By Sunrise concert.

Some interesting facts about Chester Bennington