Biography of David Copperfield.  If you want to find out who the best magician and illusion master in the world is, it's David David Copperfield.  This man was born with the real name David Seth Kotkin, on September 16, 1956 in New Jersey.  His mother was an insurance clerk and his father was a merchant who owned a men's clothing store.  His speed in absorbing magic lessons and tricks that he taught himself, greatly helped him in building his early career.  At the age of 12, David was able to start and have his own solo show.  The name "David Copperfield" was taken from a fictional character named David Copperfield who appeared in the novel of the same name, David Copperfield by Charles Dickens. 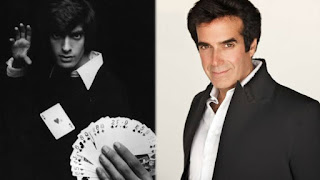 At that time, many acknowledged that the boy had great talent and his game was so brilliant, no less than a magician who was more mature.  Four years of doing solo shows and continuing to train his skills in magic, talent and skills David attracted the Society of American Magician (American Magician Society). He was then drawn into the circle of people who love the art of illusion and manipulation.

In addition, when he was 16 years old, David was teaching magic courses at New York University.  This made him the youngest person to ever teach at the university.  Teaching and having a solo show didn't make David interested in other arts.  The man, who took the stage name David Copperfield after being inspired by the classic novel by Charles Dickens written in 1850, was attracted when he was offered a musical appearance called The Magic Man.

At that time, David was 18 years old.  “While participating in the musical, I had to do magic shows and sing.  The longer the duration of the drama, the longer I played magic and they wanted me to sing less. I thought I didn't have the talent to be a singer, ”recalls David.  When the show The Magic Man was over, David continued his studies at Fordham University.


However, he faced a problem.  After the musical expired, he was unemployed.  He has no money and is forced to rely on what his father sends to make a living.  Luckily, his bad luck changed after a year without a clear purpose in life.  “When the show ended, I had to starve for a year in New York.  My dad sent me money so I could pay for the apartment rent.  Every day I sit in my apartment, learning and improving my magic skills while finding the right music for my show.

I knocked on many doors and sent many videotapes of my magic. Until one day, I got a phone call and asked to host a television show.  At that time I was only 19 years old.  I could not believe what I heard that, "said David.  His first television show took David to fly to Honolulu, Hawaii, when he hosted a magic show at the Pagoda Hotel.  The event was a success with the concept of combining music with magic. The music was produced by Gershwin.

While on stage, David was inspired by the duet of Gene Kelly and Fred Astaire.  "At that time I felt really cool.  I wear big necklaces, shiny jackets, and bad haircuts, ”David said, laughing.  The show was a huge success.  David also realized that he had to maintain his rating by giving his loyal audiences and fans special tricks and performances.  "So, I just put on that shiny jacket and keep the haircut
I'm the ugly one, then I lost an airplane, "he explained.

Personal life
Copperfield was once engaged to supermodel Claudia Schiffer.  After 6 years of relationship, they separated in 1999. Copperfield's father, Hyman Kotkin alias Hy, passed away in February 2006 in San Diego, California.  During his lifetime, Hy often accompanied his son when he toured the world.  Copperfield maintains a Remember Hy website in memory of his father.  In April 2006, Copperfield and his two female assistants were victims of an armed robbery in West Palm Beach, Florida.  At that time, they had just finished performing when they were robbed of a gang of young robbers.  The two assistants handed over all their money, passports and cell phones.  But according to a statement he gave the police, Copperfield gave nothing to the robber.  Copperfield admits he used the speed of a magician's hand to hide his belongings.


Most of Copperfield's appearances have been television specials and guest appearances on television shows.  On the big screen, Copperfield played Ken the magician in the horror film Terror Train in 1980. In addition, Copperfield has appeared as an extra in the film Prêt-à-Porter (1984), but his name is not included in the cast list.  In 1982, Copperfield founded the Project Magic foundation

To help rehabilitate patients who have paralyzed hands by teaching magic movements as a method of physical therapy.  The method he developed is accredited by the American Occupational Therapy Association, and is used in more than 1,100 hospitals in 30 countries around the world.  In 1996, Copperfield wrote a fictional anthology entitled David Copperfield's Tales of the Impossible which takes a background in the world of magic and illusion.  In writing the book Copperfield collaborated with Dean Koontz, Joyce Carol Oates, Ray Bradbury, and other team members.  The following year published a second volume, David Copperfield's Beyond Imagination (1997).

Copperfield owns the International Museum and Magic Arts Library in Las Vegas, Nevada.  The museum was founded as a Copperfield effort to preserve the history of magic arts, and a collection of antique magic sets, books and objects related to magic arts.  Forbes magazine reports that David Copperfield had an income of 57 million US dollars in 2003. This amount makes him the 10th most expensive paid celebrity in the world.  In 2004, her income was estimated at US $ 57 million (35th place), while her 2005 income was still US $ 57 million, but dropped to 41st place on the list of the world's top celebrities.  Each year, David Copperfield performs more than 550 shows around the world.