Edwin Howard Armstrong (December 18, 1890-February 1, 1954) was an American inventor and one of the great engineers of the 20th century.  He is best known for developing technology for FM (frequency modulation) radio.  Armstrong won multiple patents for his invention and was inducted into the National Inventors Hall of Fame in 1980. 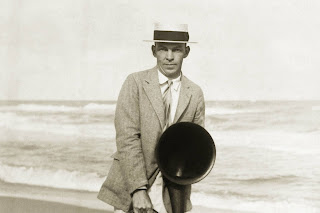 Youth
Armstrong was born in New York City on December 18, 1890, to the son of John and Emily Armstrong.  His father was an employee of Oxford University Press, while his mother was deeply involved in the Presbyterian Church.  When he was very young Armstrong became afflicted with St Vitus' dance-disorder — the muscles forced him to be home-schooled for two years.

Education
Armstrong was 11 years old when Guglielmo Marconi made the first trans-Atlantic radio transmission.  Enchanted, young Armstrong began studying radio and building homemade wireless equipment, including a 125-foot antenna in his parents' backyard.  His interest in science and technology took Armstrong to Columbia University, where he attended the Hartley Laboratories school and made a strong impression on several of his professors.  He finished college in 1913 with a degree in electrical engineering.

Regenerative Circuit
The same year he graduated, Armstrong invented the regenerative or feedback circuit.  Amplification regeneration works by feeding the radio signal received through a radio tube 20,000 times per second, increasing the strength of the radio signal received and allowing radio broadcasts to have a greater range.  In 1914, Armstrong was awarded a patent for this invention.  Its success, however, was short-lived;  the following year another inventor, Lee de Forest, filed several competing patent applications.  De Forest believes he has developed the first regenerative circuit, as did several other inventors who have been involved in legal disputes that lasted years.  Although the original case was resolved in Armstrong's favor, a later ruling ruled that De Forest was the true inventor of the regenerative circuit.  This is Armstrong '

FM radio
Armstrong is most commonly known for inventing frequency modulation, or FM radio, in 1933. FM enhances the audio signal from the radio by controlling the static caused by electrical equipment and the Earth's atmosphere.  Prior to this, amplitude modulation (AM) radios had been particularly vulnerable to such interference, which is what Armstrong asked to investigate the problem in the first place.  He conducted experiments in the basement of Columbia University Philosophy Hall.  In 1933, Armstrong received US patent 1,342,885 for the "Radio Oscillation High Frequency Receiving Method" for his FM technology.

Again, Armstrong is not the only one experimenting with the technology.  Scientists at the Radio Corporation of America (RCA) are also testing frequency modulation techniques to improve radio transmission.  In 1934, Armstrong presented his latest findings to a group of RCA officials;  he then demonstrated the power of technology using the antenna at the top of the Empire State Building.  RCA, however, decided not to invest in technology and instead focus on broadcast television.

Armstrong didn't lose faith in his inventions, though.  He continued to refine and promote FM radio technology, first through partnerships with smaller companies such as General Electric and then by presenting the technology for the Federal Communications Commission (FCC).  In contrast to RCA officials, the folks at the FCC presentation were impressed by Armstrong's demonstration;  when he played their jazz recordings on FM radio, they were struck by the clarity of the sound.

Improvements in FM technology during the 1930s made it more and more competitive with existing technologies.  In 1940, the FCC decided to create a commercial FM service, which launched the following year with 40 channels.  However, the outbreak of World War II limited the resources that could be put into the new radio infrastructure.  Conflict with RCA - which still used AM transmission - also prevented FM radio from taking off.  It wasn't until after the war that technology started to win popular support.

In 1940, RCA, seeing that it was losing the technology race, tried to license Armstrong's patent, but he turned down the offer.  The company then developed its own FM system.  Armstrong accused RCA of patent infringement and began litigation against the company, hoping to win damages for lost royalties.

Dead
Armstrong's inventions made him a rich man, and he held 42 patents in his lifetime.  However, he also found himself involved in a protracted legal dispute with RCA, which saw FM radio as a threat to the AM radio business.  Much of Armstrong's time, as a consequence of litigation, was devoted to legal matters rather than working on new discoveries.  Struggling with personal and financial problems, Armstrong committed suicide in 1954 by jumping to his death from his New York City apartment.  He is buried in Merrimac, Massachusetts.

Legacy
Apart from frequency modulation, Armstrong is also known for developing a number of other important innovations.  Every radio or television today uses one or more of its inventions.  Armstrong even invented a superheterodyne tuner that allowed the radio to tune into a different radio station.  During the 1960s, NASA used FM transmission to communicate with astronauts while they were in space.  Today, FM technology is still used worldwide for most forms of audio broadcasting.