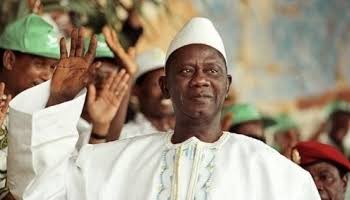 Lansana Conte was the second President of Guinea from 3 April 1984 until the end of his life.  He is a Muslim leader from the Soussou tribe.  After he left, there were many military coups in his country.

His post was later held by Moussa Dadis Camara, leader of Guinea's National Council for Development and Democracy.

In 2005, he fired Government Leader Daelin Diallo who was announced by decree and broadcast on national television channels.  The Minister of State for the Presidency of Fode Bangoura was effectively appointed as the leader of the government.  This is done in connection with the various actions that occur.

He has prevented citizens from leaving their homes after a curfew was imposed on February 13, 2007. He also imposed emergency laws following days of violent demonstrations against the government.  Armed soldiers and police patrol the streets of Conakry, the capital of Guinea.  The emergency law only allows residents to leave their homes for four hours, between 16:00 and 22:00.
He announced on state TV and radio on the evening of February 12, 2007 a military crackdown that lasted until February 23, 2007. It was intended to quell the wave of rioting and looting across the country that had accompanied a general strike against the 23-year government.

He ran and won the third presidential election on December 21, 2003 with 95.3 per cent of the vote after all opposition candidates, except one man, boycotted the election at that time.

While expressing confidence that Conté will not allow fair elections.  In recent years Conté's health has deteriorated and his ability to last until the end of his tenure has been in doubt.
As of January 19, 2005, it was reported that his motorcade was shot down on its way to Conakry.  But the assassination plan failed and only injured one of his bodyguards.  Meanwhile Conte was declared safe and was not seriously injured.

The news of his safety was then broadcast on local radio and television.  The news conveyed that he was saved because God had not yet set a time for his death.  He also condemned those who tried to thwart the development of the Guinea state.

On a visit with his family to France in 2005, Prime Minister François Lonseny Fall declared his resignation.  He complained that corruption and interference continued to escalate in Conte's government.

His successor during the fall of Cellou Dalein Diallo only lasted until April 2006.Conte was deemed to have failed to appoint a new prime minister until late January 2007.

In April 2006 he was flown to Morocco for medical treatment.  Many people hoped he would not come back.  May 2006 riots broke out in Conakry due to high prices for rice and fuel.  This led to many deaths and a violent rebellion.

In August 2006 he was again flown to Switzerland for treatment again.  This time no crowds met him on his return to Guinea.  Meanwhile Henriette Conte, his first wife, is accused of breaking the rule of law and taking advantage of the President's physical and mental disabilities.  She abused her husband's power.

In August 2006, local human rights investigators issued a report on 30 cases condemning human rights violations in Guinea.  They highlighted the power vacuum resulting from the President's illness and expressed public concern about the future.

In an interview with the Guinéenews journalist, October 2006. Lansana Conte said he would remain President until 2010. This is the end of his seven year term.  Conte also said that he was looking for a country-loving replacement and would protect it from attacks by enemies as well as rebellion.

In November 2006, Transparency International updated its annual corruption index.  Guinea under the administration of Lansana Conte is the most corrupt country in the world.

This news is a concern for foreign companies who intend to invest in Guinea because they cannot operate properly in Guinea.

In January 2007, a general national strike was held.  They protested against Conte's continued leadership of the country he runs.  The strike continued for more than two weeks, during which hundreds of thousands of demonstrators marched in the streets.

In the first two weeks, the savage repression carried out by red-caps (Presidential guards) and other security forces left at least dozens of demonstrators dead.  At the end of the attacks on January 27, it was reported that at least 90 demonstrators were killed in clashes with police and at least 300 were injured, according to a local human rights group.

The strike ended after an agreement between Conte and the trade unions, which called for a new Prime Minister to be appointed as head of government.  Conte also agreed that the price of rice and fuel could be low.

February 9, Conte appointed Eugene Camara, who previously served as Minister of State for Presidential Affairs since January as Prime Minister.  This was rejected by the opposition so violence broke out after the appointment.  The attacks resumed on 12 February, and Conte declared martial law the same day.

On 25 February Conte agreed to end the strike.  Until finally, 26 February he appointed a new Prime Minister, Lansana Kouyate, from the roster chosen by the union and representatives from civil society.  The communities returned to work on 27 February.  Kouyate was sworn in on March 1 in a ceremony Conte did not attend.

A shocking step in the history of Conte's reign.  On 20 May 2008, he was dismissed by Kouyate and replaced him with Ahmed Tidiane Souare.  Kouyate was considered disappointing in carrying out his role as Prime Minister.