Luna Maya is a beautiful Indonesian artist born in Denpasar, Bali, August 28, 1983. Luna has a career as a model, advertising star, as well as a film and soap opera star.  Luna Maya started her career as a catwalk model star, then developed herself in acting, both films and soap operas.  Her notable achievement as a model was the selection of Luna as the 2006 Lux Star. 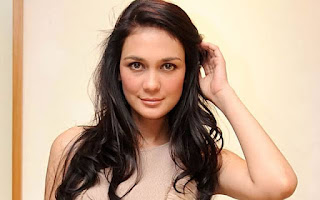 A year later Luna was again involved in the film BROWNIES (2005).  As in the previous film, in this film directed by Hanung Bramantyo, Luna still gets a small role.  Luna just got the main role, when starring in the film BANGSAL 13 (2005) by playing the character Mina.

Luna Maya's name has soared in the entertainment world, when she played the film CINTA SILVER with Rima Melati and Catherine Wilson.  At the same time, his relationship with Ariel, the vocalist of the band Peterpan, was warming up, although it ended in a breakup.  However, when Ariel's household with Sarah Amalia broke up, the student of Paramadina University's International Relations major was still accused of being the "culprit" of the divorce.

During her career, Luna has starred in a number of films, such as Brownies, Cinta Silver, Ruang, Bangsal 13, Jakarta Undercover, 30 Days Seeking Love, Messages From Heaven and many more.  Some of the soap operas he has starred in include Dan, You and I, Ada Cinta, My Secret, Anggun, the Light of Heaven, My Sujud, Yasmin, Dewi and those that air on Astro Akhir Cinta Subscription TV.

Apart from the above films, this ex-girlfriend of Fachry Albar has also starred in the films RUANG, JAKARTA UNDERCOVER, ALEXANDRIA and MESSAGE FROM HEAVEN.  Even in 2006, through the film RUANG managed to get her into the nomination for the Indonesian Film Festival in the category of Best Female Actor.  While several soap operas he has starred in include, DAN, YOU AND ME, THERE IS LOVE, MY SECRET and ANGGUN.

A series of achievements made by Luna made her chosen as one of the torchbearers at the 2008 Olympics. Luna is not only the world of roles and models.  Together with Dewi Sandra and Sandra Dewi, Luna also contributed her voice in the Euro 2008 theme song entitled Play.

Realizing that her career in the entertainment world could not be used forever, Luna began to learn to do business.  He opened a boutique called LM For Hardware in Bandung and Jakarta.  Recently, Luna launched a Lounge / Cafe called Envy in Bandung.

After collaborating with Dewi Sandra and Sandra Dewi, Luna returned to collaborating, this time with Dide, the vocalist of the band Hijau Daun.  They sang the song Suara (Ku hope) by Hijau Daun which was rearranged in a dangdut version.  This song is the soundtrack for Luna's latest film, Janda Kembang.  Then Luna also contributed a religious song entitled Menuju SurgaMu by Alam Urbach, who is actually a non-Muslim.  In addition, Luna is also expanding in the field of directing by directing an indie short film entitled Suci And The City, the video clip for singer Nadia's latest single (Dhea Ananda) entitled "Kau Tak Setia" where Luna also acts as a producer for her latest album, and a video.  clip of a new band called My Name Band

Luna Maya's popularity is increasingly proven when Luna makes the current most popular page account Twitter.  In just a short time, Luna has gathered more than a hundred thousand followers.  In fact, it still continues to grow even though the account has been closed since last December.

Recently Luna won a 'Special Mention' award for her short directed film 'Suci And the City' at the LA Lights Indie Movie Awarding Night.  Unfortunately, Luna's achievement was not well appreciated by infotainment actors.  The unwise attitude of the infotainment actors was shown again during the reading of the 2010 Panasonic Gobel Award nominations (18/2/2010).  When Luna's name was read out as a nominee for the categories "Favorite Actress" and "Favorite Variety Show Music Presenter", several journalists even issued inappropriate insults.  This is really ironic when the infotainment party has issued a statement of peace against Luna on the same day.

Apart from regularly presenting Dahsyat, Luna, who has been designated by Indonesia's Showbiz Insiders as "# 1 Highest Paid TV Star 2009", has shifted the position of Dude Herlino, and "# 3 Highest Paid Actress 2009", is currently preparing to shoot her latest film.  In this comedy / action genre film, Luna with Poppy Sovia and Tyas Mirasih will showcase their expertise in martial arts.

Luna Maya controversy
Luna Maya's Twitter controversy began when she updated her Twitter status with the following Tweet, “Infotainment is more HINA than PROBLEM, KILLER !!!!  may ur soul burn in hell !!… “.  Spontaneously, responses from various circles emerged.  be it a positive or negative response.  Luna Maya finally apologized to those who felt offended and finally she deactivated her Twitter on 15 December 2009 with her last Tweet, “Sorry, all for tweets that are not important, but for those who understand, thank you, but for those who don't understand, I'm sorry.  … ”

In 2010, Luna Maya was caught up in a pornography case involving herself and Ariel Peterpan.  Sex videos with perpetrators very similar to Ariel and Luna Maya are widespread on the internet and put their artist's career at risk.  This creates a bad impression on Luna Maya in the eyes of the Indonesian people and is a bad example of the world of Indonesian artists.