Chelsea Islan is a young, newcomer actress whose name immediately skyrocketed thanks to her first role as Annalise in the film Refrain in 2013 which is an actress born in Washigton, DC, June 22, 1995. Although born in Washington DC, Chelsea Islan was raised in Indonesia and is an Indonesian citizen.  .  Chelsea itself already has a foundation in acting through the theater stage, so that it has no trouble showing its acting in the world of cinema.  Check out the full biography below. 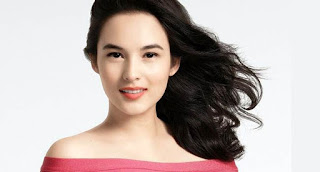 Chelsea Islan career
Chelsea Islan's career in the entertainment world began as a video clip model for the Noah Band on the song "No More Ssama" in 2013. Starting from that role, Chelsea became known by the Indonesian public.  Thanks to his pretty good appearance in the video clip, he was offered to attend training at a production house.  Thanks to his experience in the theater stage, making Chelsea have no trouble acting in front of the camera.  In the same year, Chelsea was also involved in the making of the film Refrain, which played Annalise, directed by Fajar Nugros.  In the film, Chelsea plays with Afgansyah Reza and Maudy Ayunda.  Even though in the film, Chelsea only played a supporting role, thanks to her role as Annalize, she was able to attract the attention of the whole community so that she got the attention of several domestic production houses.

Thanks to her talent for acting in front of the camera, in 2014 Chelsea Islan played in the film Street Society which played Karina, a beautiful, talented DJ who has two characters.  Street Society is an Indonesian film with the automotive action genre distributed by Ewis Pictures and directed by Awi Suryadi with Marcel Chandrawinata.

Not only playing in films, in the same year Chelsea Islan also played for the comedy TV series Tetangga Masa Gitu ?, a situation comedy that depicts the daily lives of 2 married couples where the two couples live in one complex and live as neighbors.  In the series Chelsea plays the role of Bintang Howard Bornstein or Bintang Irawan.  Bintang or commonly called bastian "bee" is an American-Indonesian crossbreed, beautiful and very clever and can even beat Angel.  It's nicknamed Wikipedia walking, because it's so clever, except when it comes to cooking.  Bintang has a distinctive crying voice that is like the sound of a puddle dog as well as distinctive words like "so sweeeeettt".  Bintang loves Bastian very much and is very considerate.  He works as a seller and online shop manager.

In 2015, Chelsea Islan's career took off as evidenced by several types of films he starred in, such as the film Behind 98. Behind 98 is a film that tells the story of the collapse of the New Order government marked by the resignation of President Soeharto.  The approach of this film is not from a political point of view but is more humanitarian.  There are several characters in the film, and the Chelsea Islan war is in the perspective of a student with Boy Wiliam.

Apart from the two films above, in 2015 Chelsea Islan also played in the film Love You .. Love You Not, an Indonesian comedy drama genre film.  The film, which was released on August 13, 2015, Chelsea islan acting with Hamish Daud, Miller Khan and others.

In 2016, Chelsea Islan is increasingly existing in the Indonesian film industry.  Evidenced by several film titles that he starred in.

In Rudy Habibie's film, Chelsea Islan plays Ilona Lanovska, a Polish girl who was once loved by Rudy Habibie during his studies in Germany, long before finally marrying Ainun's mother when Habibie finished his studies and returned to Indonesia.

In the same year, Chelsea Islan played in the film 3 Srikandi who played Lilies Handayani, an archery athlete from Indonesia who won the first medal in the Olympics.

Still in 2016, Chelsea Islan was also involved in a film entitled Headshot.  In a film that tells the story of a man suffering from amnesia with a mysterious past.  He then becomes a deadly "killing machine" when he has to deal with a very dangerous drug kingpin, Chelsea Islan as Ailin.  Apart from the above films, Chelsea Islan also played in the film Pinky Promise in 2016.

Chelsea Islan romance
For romance, Chelsea Islan always covers up all the news about his love affair.  Like recently, the public was shocked by the news of the closeness between Chelsea Islan and Bastial Steel, both of whom did not hesitate to share romantic moments on Instagram.

However, long before the circulation of his close relationship with Bastian Steel, Chelsea Islan was first rumored to be close to Deva Mahenra, who co-starred in the Neighbors of the Future?

Until a year ago, the public was again shocked by the closeness of Chelsea Islan to Chicco Jerikho, which was recorded by several portraits of his togetherness that were scattered in cyberspace.  However, until now Chelsea Islan has been very careful to cover up his love life.